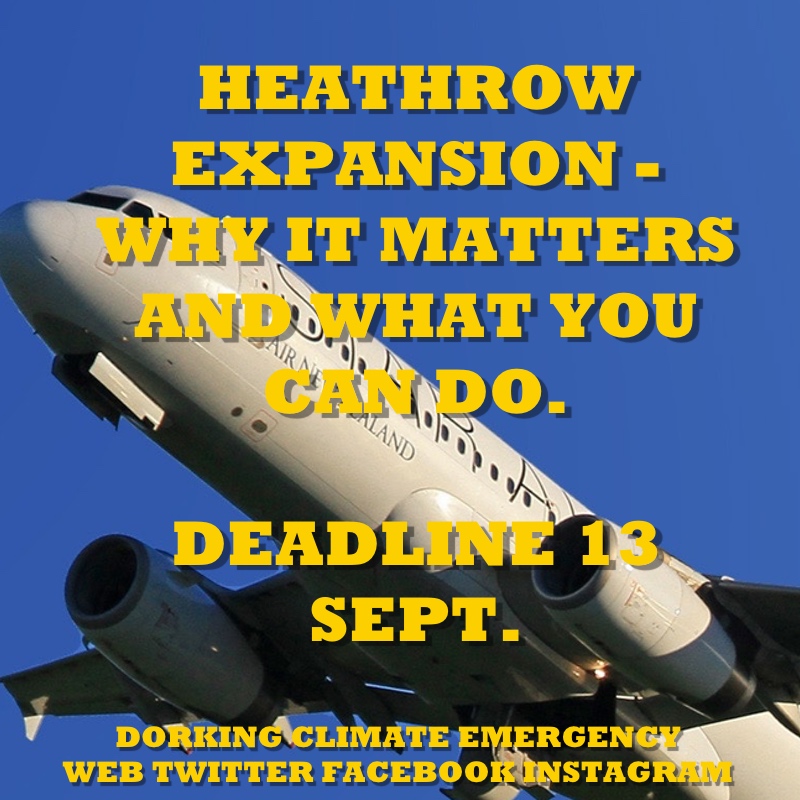 Expanding Heathrow Airport is in direct contravention of the UK Government’s stated aim of reducing emissions and acting on the Climate Emergency.

This is also a local issue for Dorking (sandwiched as we are between Heathrow and Gatwick). Your voice matters. A proportion of additional air traffic will be routed over Mole Valley.

The Airport Authority’s glossy books, expensive publicity and consultations with the public are not the whole story: this expansion will devastate carbon neutrality targets.

Please write to them at feedback@heathrowconsultation.com  and do it before their Friday September 13th deadline.

If you’re not sure what to write, here’s a sample letter.

But use your own words as far as possible.

One more thing? Think about your own choices too. Cutting down air travel (alongside moving to a plant based diet and joining a group like ours) is one of the top 3 things any individual can do to help combat the climate crisis.

Your address & date here. (Needed for them to know you’re a real person!)

My objections to Heathrow expansion.

The UK government has pledged to go carbon neutral by 2050:  even that target is weak, given the urgency of climate change.

However, the proposed new runway will cost billions, will cause unbelievable (and still not fully known) disruption to people’s lives for years, will increase air and noise pollution and speed up global warming because of increased aircraft traffic and also the huge amounts of building work required. The ‘cosy’ image put forward in much of the Heathrow publicity looks like ‘greenwash’ to me.

Financial compensation does not compensate for ruined lives.

We cannot have ‘business as usual’ when the world as we know it is crumbling around us.

As I write, the Bahamas is facing its worst ever hurricane, the Amazon is burning more than ever before and Greenland glaciers are melting at an unprecedented rate.

Forgetting about the human cost (as yet unknown but considerable) there is the financial cost.  Governments around the world are facing larger and larger reparation costs as climate events increase in frequency and intensity.

And we cannot have infinite expansion in a finite world.

To be specific about Heathrow:

The ‘on the ground’ work needed to build a third runway:

Air and noise pollution during building works and with another runway

Has anyone looked into the huge cost to the NHS from all the extra pollution and mental health problems that the expansion will cause? What figures have been given? Have there been any investigations into the health implications of the expansion?

There are many other issues to consider but I would like to end by asking why we need airport expansion min the first place.  For cheap weekend holiday breaks to Europe?  For flowers flown in from Africa and fresh peas from Central America? These are luxury items. And there are alternatives which won’t cost the earth.

I do not want my taxes to go towards this project:  if there is money to spend then improve the rail transport network.

There is no Planet B.  Drop Heathrow expansion plans and think of the future of the world, its children and those who are yet to be born.

I look forward to hearing from you.

And Finally … Time To Do Your Bit

We have lots of little tasks that need doing (writing to MPs; visiting councillor surgeries; writing to supermarkets).

Keep trying if you don’t hear straight back from us. We have jobs kids and busy lives just like everyone else.